I made some of these animations faster than the others to demonstrate how fast they can be played without looking too weird. Some of them are jumpy but that's just how they saved as a gif. And yes the 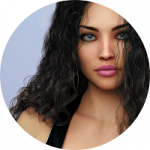 Ok, so here's a few ideas