Do you want it?

I personally voted no, i think a pose editor would create a lot of problems that either wont ever get fixed or will get done in some really bad way.   Just a few issues i can see with it:   1. How to 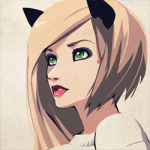 I want a Drama Editor.